The sport of golf has seen a resurgence in popularity in recent years. Along with this renewed interest comes an increased interest in golf tournaments with large purses. Here is a look at the tournaments with the largest purses in 2022-2023. These tournaments offer golfers a chance to compete for large sums of money, increase their World Golf standing, and move up the all time money list. They also provide an opportunity for fans to watch the best golfers in the world compete at the highest level.

This past Summer, many changes were made to the 2022-2023 PGA Tour season in response to added pressure and players leaving for the LIV Tour. Among the changes PGA Tour Commisioner Jay Monahan made, were elevated events with purses of $20 million, and increased money for the player impact program.

See below for the tournaments in both the PGA and LIV Tours with the largest total purses: 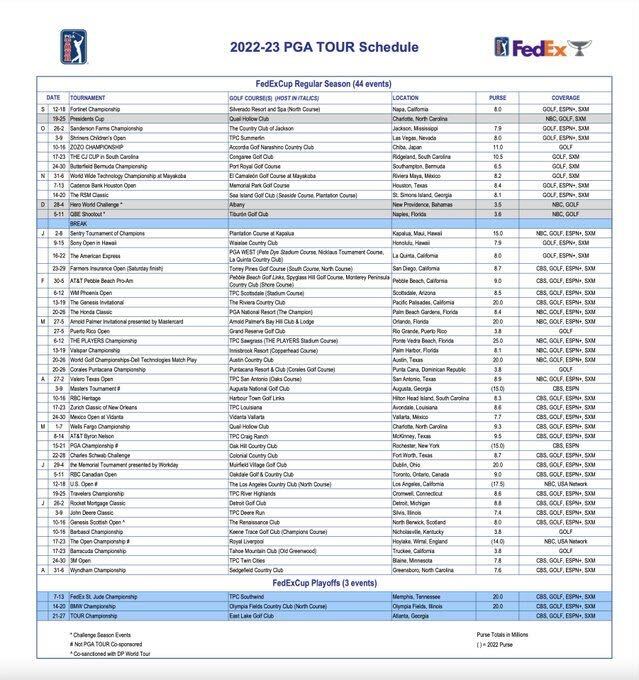 The Open Championship, also known as the British Open, is the oldest of the four major championships in professional golf. It is held annually in the United Kingdom on one of nine different courses, rotated between a selection of historic venues. This year’s tournament will be held at Royal Liverpool Golf Club in Hoylake, England from July 20-23.

The PGA Championship will be held at Oak Hill Country Club in Rochester, NY from May 18-21. This prestigious event has a total purse of $15 million, making it one of the most lucrative events on the PGA Tour. The course at Oak Hill is notoriously difficult, so the players will have their work cut out for them if they want to take home the title. With such a large purse up for grabs, the competition is sure to be fierce.

The Masters is one of the four major championships in professional golf. It is the first of the majors to be played each year. It is held at the Augusta National Golf Club in Augusta, Georgia, USA. The tournament is an invitational event, with a field of invitees determined by a points system. The Masters has a total purse of $15 million, with the winner receiving $2.25 million.

The PGA Tour’s Sentry Tournament of Champions will be contested at the Plantation Course at Kapalua, Maui, HI, from Jan. 5-8. The tournament will feature a field of 42 players and will have a total purse of $15 million. The winner of the tournament will receive $3.5 million.

The U.S. Open is one of the most prestigious golf tournaments in the world, and this year’s event will be held at the Los Angeles Country Club. With a total purse of $17.5 million, this is sure to be a highly competitive event. The course at the LACC is known for being tough, so the winner will definitely have earned their victory. This tournament always attracts a great field of players, and with the increased prize money, it is sure to be even more competitive than ever. Be sure to tune in to see who comes out on top at this year’s U.S. Open!

The FedEx St. Jude Championship is a PGA Tour FedExCup Playoffs event with a total purse of $20 million. It is held at TPC Southwind in Memphis, TN, August 10-13. Notable past champions include Sergio Garcia, Adam Scott, and Henrik Stenson.

The Memorial Tournament is one of the most prestigious events on the PGA Tour, and is played at the legendary Muirfield Village Golf Club in Dublin, Ohio. This year’s tournament will have a total purse of $20 million, making it one of the richest events in golf. The Memorial is always a highly competitive event, and this year’s field is sure to be one of the best. With so much money on the line, the pressure will be on for the players to perform at their best. It should be a great tournament to watch.

The World Golf Championship Match Play is a professional golf tournament that is part of the PGA Tour. The tournament is played at the Austin Country Club in Austin, Texas, and has a total purse of $20 million. The event was first played in 1999, and was won by Tiger Woods.

The Arnold Palmer Invitational is one of the premier events on the PGA Tour, and takes place annually at Bay Hill Club in Orlando, Florida. This year’s tournament will take place from March 2-5, and features a whopping $20 million total purse. With such a large purse on the line, you can be sure that all of the top golfers in the world will be in attendance, looking to add this prestigious title to their resumes.

The Riviera Country Club will host the 2022-23 Genesis Invitational from February 16-19. This PGA Tour event has a total purse of $20 million, making it one of the richest events on the Tour. Riviera has hosted this event since 1999, and it has been won by some of the biggest names in golf, including Tiger Woods, Ernie Els, and Phil Mickelson. This year’s event is sure to be another exciting one, so be sure to catch all the action on TV or in person if you can.

The LIV Tour has attracted many names due to money and tournament purses. The first 7 LIV Tour Events offer a total purse of $25 million per tournament, making it one of the most lucrative, if not controversial, golf tours in the world. Tournaments will be held at various golf courses including Stonehill Golf Course (Thailand) and Royal Greens Golf and Country Club (Saudi Arabia). This tour features some of the biggest names in the sport like Phil Mickelson and Dustin Johnson.

The Trump National Doral in Miami, Florida will host the Team Championship for the LIV Tour’s finale from October 27-30. It comes with a total purse of $50 million, with the 4-man team that wins earning $16 million. The tournament will be held on the famed Blue Monster course, which was previously home to the PGA Tour’s Cadillac Championship until 2016.

The PGA Tour finale and decider of the FedExCup champion is the richest tournament in golf. The tournament will be held at the East Lake Golf Club in Atlanta, GA, and has a total purse of $75 million. Just 30 of the original 70 players who started in the first stop of the FedExCup playoffs will be teeing it up in the Tour Championship. Who will make the cut and have a chance to take home the big prize?